Welcome to the Brewer Fire Engine Co. #1 Fire Prevention page. While we are well equipped to fight fires ,  we would like to share some information with you on how to prevent them. Please read the literature and watch the videos , as they will aid you in creating a safe home, and possibly save valuable seconds in a time of emergency.

How would you like to go on a tour of your own home -- a tour unlike any other you may have taken and one that may present your familiar surroundings in a new and important light? Well, now's the time. The tour outlined here has just one purpose: to help you look at each major room of your home and learn how to make it safer for every member of your family. We've listed all recommendations for the safety features and equipment each room should ideally contain.

Should an emergency situation occur in your home such as fire or carbon monoxide, be sure your family has a planned escape route and meeting place outside your home. Discuss the plan with your family and rehearse it together so that each member understands the importance of a safe escape.

The Facts About Fire

In 2016, U.S. fire departments responded to an estimated 1,342,000 fires. These fires caused 3,390 civilian deaths and 14,650 civilian injuries. In the same year, 69 firefighters were fatally injured and 62,085 firefighters experienced non-fatal injuries while on duty.

The 2016 fire statistics (except those for firefighter fatalities) are projections derived from NFPA’s annual fire department survey. The 2,769 departments that responded to the sample survey protect 132 million people, or 41% of the total U.S. population.

In 2016, the 280 deaths caused by car, truck, and related vehicle fires was almost two times the 150 deaths resulting from non-residential structure fires.

Three of every five road vehicle fire deaths resulted from fires caused by collisions or overturns.

In most years, roughly half half (49%) of all reported fires were outside or unclassified types of fires.

Brush, grass, or forest fires accounted for 22% of these fires; 13% were outside rubbish fires, 7% were outside fire involving property of value, and 8% were unclassified or other non-structure, non-vehicle fires.

In 2016, home structure fires caused 81% of the civilian fire deaths and 73% of the civilian fire injuries. (Homes include one- and two-family homes, apartments, townhouses, row houses, and manufactured homes.) The graph below shows how the leading causes vary depending on whether the interest is in fires, deaths, or injuries.

Unattended cooking is the leading factor contributing to these fires. Frying poses the greatest risk of fire.

More than half of all cooking fire injuries occurred when people tried to fight the fire themselves.

Smoking has been the leading cause of home fire deaths for decades.

Heating equipment was involved in one of every five home fire deaths.

Intentional fires were the fourth leading cause of home fires.

Intentional fire setting was blamed for 8% of home fires, 15% of home fire deaths, and 7% of home fire injuries. According to FBI statistics, nearly one out of every three people arrested for arson in recent years were under 18.

Electrical distribution or lighting equipment was the third leading cause of home fires.

Electrical factors can play a role in any fire involving equipment powered by electricity. Electrical failures were factors in 13% of home fires.

Almost all U.S. homes have at least one smoke alarm, but three of every five home fire deaths resulted from fires in homes with no smoke alarms or none that worked.

People who are under the influence of alcohol, drugs, or medications, have disabilities, or are very close to where the fire started, may not be able to act on a smoke alarm’s warning. Nuisance alarms are the leading reason for disabling smoke alarms.

Sprinklers decrease the fire death rate per 1,000 reported home fires by about 81%.

NFPA’s Fire Sprinkler Initiative® : Bringing Safety Home is a nationwide effort to encourage the use of home fire sprinklers and the adoption of fire sprinkler requirements for new construction.

Compared to their share of the population, older adults were more likely to die in home fires than people in other age groups.

States with the highest fire death rates tend to have higher percentages of:

What do I need to know about fire?

Fire can and might happen to you! You must be prepared and have the knowledge to escape safely. Fire is darker, smokier, hotter, and faster than you can imagine. You must know what fire is like in order to escape the danger safely. The following are four important facts to remember:

There is no time. A residential home can be totally consumed in flames in less than five minutes from the start of a fire! There is no time to waste. You must know what to do and you must get out. A closed door is often the best way to stall a fire . By closing the door, you may save yourself valuable seconds to use an alternate escape route. However , be sure to try and leave doors unlocked, for easy access by the fire department.

The National Fire Protection Association credits smoke alarms with helping reduce fire-related fatalities in the U.S. by over one-third in the last ten years. Having a properly installed and working smoke alarms in your home increases your family's chance of safely escaping a fire by up to 50 percent. In addition to properly outfitting your home with smoke alarms, you should develop and practice regularly a home escape plan in case a real fire should occur, because smoke alarms may not waken all individuals.

To help you plan you escape plan, first, take into consideration the following:

When practicing an escape plan, be sure that all family members know and properly understand the following, especially children:

If your clothes should catch fire, don't run! STOP! Where you are, cover your face, DROP to the ground, then ROCK back and forth to smother the flames!

Always remember If your smoke alarm sounds, follow your family escape route, get out of the house as quickly as possible, closing all doors behind you but not locking them and call the fire department. Do not attempt to fight the fire.

I have one smoke alarm in my home. Is that enough protection against fire?

Where should I install smoke alarms and fire extinguishers?

Where to install smoke alarms and fire extinguishers is the most important consideration in proper fire protection. Quite often, they are improperly located and are not easily accessible or do not work properly.

However, we suggest that you:

Other important considerations include:

How do I select the right smoke alarms and fire extinguishers for my home?

First, establish how many you will need and where you will install each alarm and extinguisher. Once you know which rooms will have smoke alarms and fire extinguishers, you can determine which features are best suited for that area.

What types of smoke alarms are there?

There are two basic types of smoke alarms: ionization and photoelectronic . Both are effective at detecting fire, yet each has a unique detecting system. Each type of detector also comes as AC-operated smoke alarms or battery-operated smoke alarms. Some AC alarms even come with a battery back-up system. Additional features can include an escape light, silencing button, or light test feature.

What types of fire extinguishers are there?

Fire extinguishers are categorized by ratings. These ratings determine the size and type of fire that the extinguisher can successfully put out. Fire can be divided into three categories: A, B, or C. An "A" type fire is primarily wood, paper and fabric. "B" type fires are primarily grease and oil based. Finally, "C" type fires are electrical in nature.

How do I maintain my smoke alarms and fire extinguishers once they are installed?

What should I do if I hear the smoke alarm's sound?

NEVER IGNORE THE SOUND OF A SMOKE ALARM. If the smoke alarm is sounding its alarm, there is a reason. You and your family must be able to escape quickly and safely. Here are several steps your family can learn and rehearse for an emergency:

By following these basic fire safety tips, you will increase your family's chances for survival in a fire.

Are there other ways I can protect my family from fires?

The following is a fire safety checklist to lower the chances that a fire may start in your home:

Is there any other fire safety equipment that I need for my home?

Having working smoke alarms and fire extinguishers in your home greatly reduces your risk of dying in a fire. However, we also recommend that you have flashlights in every bedroom in case of a fire emergency. Since fire is very dark, a reliable working flashlight can help light your way to safety. In addition be sure to have all emergency numbers posted next to a telephone.

Often called the invisible killer, carbon monoxide is an odorless, colorless gas created when fuels (such as gasoline, wood, coal, natural gas, propane, oil, and methane) burn incompletely. In the home, heating and cooking equipment that burn fuel are potential sources of carbon monoxide. Vehicles or generators running in an attached garage can also produce dangerous levels of carbon monoxide.

November 1-7 is Carbon Monoxide Awareness Week in parts of Canada! 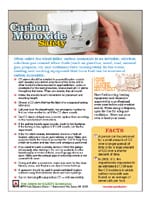 In the home, heating and cooking equipment that burn fuel can be sources of carbon monoxide (CO). 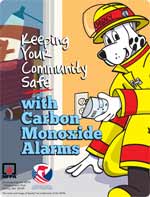 Use free resources from NFPA and the U.S. Consumer Product Safety Commission to conduct a CO alarm awareness campaign in your community.

CO enters the body through breathing. CO poisoning can be confused with flu symptoms, food poisoning and other illnesses. Some symptoms include shortness of breath, nausea, dizziness, light headedness or headaches. High levels of CO can be fatal, causing death within minutes.

The concentration of CO, measured in parts per million (ppm) is a determining factor in the symptoms for an average, healthy adult.

Smoke alarms save lives. Smoke alarms that are properly installed and maintained play a vital role in reducing fire deaths and injuries. If there is a fire in your home, smoke spreads fast and you need smoke alarms to give you time to get out.

Here's what you need to know! 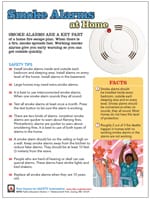 Download this free tip sheet on the use and maintenance of smoke alarms. Working smoke alarms give you early warning so you can get outside quickly. 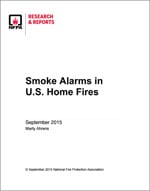 This report focuses chiefly on smoke alarm presence and performance in home fires reported to local fire departments in the United States.

NFPA's Dan Doofus reminds you to have enough smoke alarms in your home, test them monthly, and replace them every 10 years.

Facts and figures about smoke alarms